Aerobic systems are similar in construction to septic systems, but differ in one important way: the septic tank, which functions without the presence of oxygen, is replaced by an aerobic tank, which uses oxygen to break down sewage. In an aerobic tank, air is pumped to the bottom of the tank and allowed to circulate through the wastes. The solids decompose more quickly than in a septic tank, leaving fewer settled solids on the bottom and clearer effluent to be distrib- uted into the soil. Chemicals and grease can adversely affect the performance of these systems. Aerobic systems can be used for upgrading an existing substandard system without New York State approval.

Aerobic tanks can be located above or below ground, depending on manufacturer’s design (see pages 25-27), size and site considerations. The average household aerobic tank ranges from 750 to 2,000 gal- lons. Aerobic tanks do require a leach field or sand filter. At present, New York State requires a conventional size leach field for new construction.

Advantages: Effluent from a properly operating aerobic tank is of higher quality than that released by septic tanks and is much less likely to clog distribution systems.

Disadvantages: Service contracts to maintain the system should be included for the life of the unit. Contracts are required for new construction, and special approval is required to use an aerobic system for new construction. Initial costs and maintenance costs are higher than those of a septic system, and this system is sensitive to grease, chemicals and power failure. Also, electric pumps require periodic maintenance.

Cost: $6,000 and up, including distribution system. 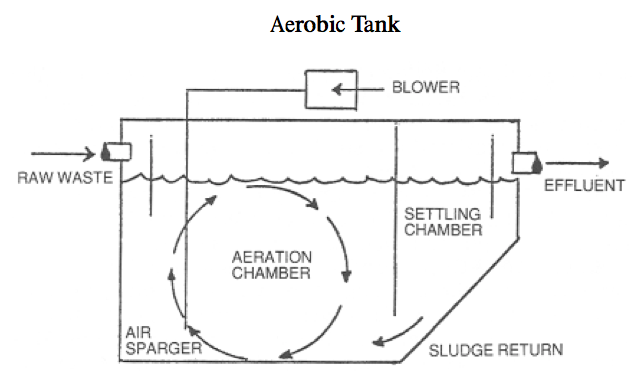 Commercial Aerobic Systems (others are available)

This system received the National Sanitation Foundation Seal of Approval for its performance in suspended solids removal, Biochemical Oxygen Demand reduction (BOD), and fecal coliform disinfection. The Multi-Flo works with an aeration system and filters that provide solids removal and bacterial treatment. Optimal treatment will require a six-eight month “start up” period; however, normal use is recommended from the time of installation.

Cost: $6,000 (1995). Users receive a two-year service contract with their purchase. Two inspections/year are recommended. The system must be pumped and filters cleaned (in washing machine) every two-four years. The aerator life expectancy is three-four years. Electricity is required.

Cautions: Aerobic treatment systems are permitted for upgrading existing systems, or for systems that incorporate soil or groundwater discharge. According to the New York State Department of Health in 2004, New York State Department of Environmental Conservation will not permit treatment technology relying on surface water dis- charge of treated effluent for new construction of individual sewage disposal systems for private residences.

The Cromaglass systems use a batch treatment system, in which aeration, separation of large particles, and clarification (settling) occur in separate chambers within the time-controlled system. Effluent is discharged and sludge can be returned to the aeration chamber or removed. The Cromaglass systems surpass EPA and National Sanitation Foundation standards for treatment technology, with 90-95% removal of BOD and suspended solids in the effluent, according to the website. Leach field size requirements may be reduced.