Save The River’s 31st Annual Winter Environmental Conference a Success

You are here: Home / Latest News / Save The River’s 31st Annual Winter Environmental Conference a Success

CLAYTON, NY – Over 160 members of the River community came together at the 1000 Islands Harbor Hotel this past Saturday for Save The River’s 31st annual Winter Environmental Conference. Program attendees had the opportunity to hear from and engage with a diverse group of speakers discussing a variety of topics related to the environmental health of the St. Lawrence River.

John Peach, executive director of Save The River and the Upper St. Lawrence Riverkeeper, opened the conference with a review of Save The River’s programs and threats facing the River. During his opening remarks, he called on conference attendees to sign a petition backing Governor Cuomo’s proposed legislation to ban polystyrene takeout food containers and packaging fill material made of polystyrene. Peach said, “As part of our “Replace Single Use Plastics” program, we are urging everyone to get behind this very important piece of environmental legislation that will help rid the River of microplastics.”

Barbara King, executive director of Watersheds Canada, kicked off the conference with tips and tools for engaging property owners to work towards long-term shoreline health. King discussed Watershed Canada’s Natural Edge Program, a program to design natural and resilient shorelines using native plants and materials for sustainable, environmentally friendly beaches. Replacing bulkheads and riprap seawalls with natural materials will aid in groundwater retention and encourage native species to return to the shoreline. Watersheds Canada is planning to make “toolkits” of their shoreline design process available to landowners and environmental organizations. 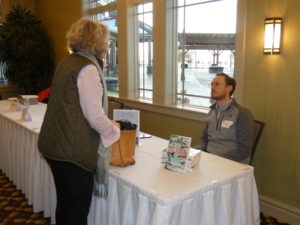 Andrew Reeves, award-winning environmental writer and the author of Overrun: Dispatches from the Asian Carp Crisis, presented on the definitive history of this invasive species in North America. Reeves’ research of Asian carp dispels the often-repeated story that the Asian carp crisis began when they broke out into the southern rivers due to a flood of an aquaculture project. His work led him to discover that Asian carp were distributed by federal, state, and university backed programs to farmers, water districts, and others attempting to control weeds and aquatic plant life. They quickly spread through middle American waterways and are today swimming towards the Great Lakes.

Save The River executive director John Peach said “I highly recommend Overrun to anyone living near the St. Lawrence River or Great Lakes as a very readable and highly informative discussion on the multi-generational threat of Asian carp. If they ever get into the Great Lakes, it could be the end of the fisheries as we know them in these waters. Save The River has been advocating for years for the construction of the Brandon Road project to block the forward progress of Asian Carp towards the Great Lakes. We plan to reach out to our members and followers to ask them to urge their Congressional Representatives to fund the project in the 2020 WRDA bill.” 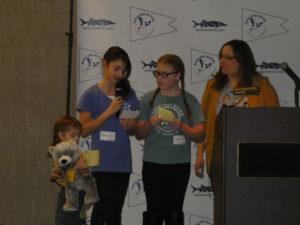 Following the lunch break, John Peach, Save The River Executive Director, presented the Friend of the River Award™ honoring Ann Ward for her longtime contributions to protect the St. Lawrence River. Peach said “Ann Ward first came to the St. Lawrence River over 70 years ago with her beloved husband Sherman. Ann has been a member of Save The River’s Board of Directors since its very early years, serving in many roles including Board President, Chairwoman of the Education Committee, and an engaged member of each of our committees. Ann is relied upon as a greatly respected Board parliamentarian and active volunteer. She always encourages strong discussion on issues in meetings and often serves as the editor of important Save The River written statements.” 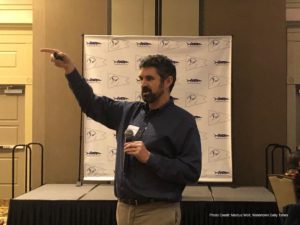 Dr. Andrew Gronewold, P.E, Associate Professor with the School for Environment and Sustainability (SEAS) at the University of Michigan, presented on his research of understanding Great Lakes water level variability. Dr. Gronewold conducts research through a range of hydrological science projects that explore methods for quantifying and communicating uncertainties arising within long-term hydrological monitoring networks and data and incorporating those uncertainties into models and risk-based water resources management decisions. His recent research has focused on monitoring, analyzing, and forecasting the long-term water budget and water levels of the Great Lakes. Dr. Gronewold was joined for a Q&A session by IJC ILOSLRB member Tom Brown. Dr. Gronewold’s research has determined that over the last ten years the Great Lakes basin has experienced the highest amount of precipitation on record and is the cause for the current high-water years that we are experiencing on the River and Lake Ontario. He expects that we will see more years of high water due to the continued high levels of precipitation caused by climate change.

A key point made by Dr. Gronewold is there is a very real need for a seamless or joint (Canadian & US) weather forecasting system that would allow meteorologists to do better forecasting across the Great Lakes basin. Save The River asked all attendees to sign petitions to Governor Cuomo and Ontario’s Premier Ford to take action to delay the 2020 opening of the Seaway to allow the ILOSLRB to remove as much water as possible from the system prior to the start of the Ottawa River freshet.

Dr. Nina Schoch, Executive Director for Adirondack Center for Loon Conservation, presented her findings on how climate change is affecting the Loon population. Dr. Schoch discussed the health of the Adirondack and St. Lawrence River loons, and that many of their shoreline nesting areas have been destroyed by the recent years’ highwaters caused by record precipitation. She is also concerned by the effects that climate change is having on loons, as the icing over of lakes and the River have changed the migratory patterns of these beloved water birds.  Dr. Schoch informed the audience that increase predation by the resurgent population of bald eagles is now being seen throughout the Adirondack area.

Rob Hoehn, former Save The River intern and CEO of IdeaScale, spoke about climate change and suggested action ideas for Northern New York. His charts and slides on the effects of carbon-based power generation and petroleum-based cars and trucks were very sobering to the conference attendees. Rob talked about his own experience with an electric car and educated the conference about the rapid changeover that is happening in the electric utility industry as it converts to solar and wind projects.

Rob offered the following suggestions to all of the conference participants

“A few things you can do to take action on climate change:

John Farrell, Ph.D., SUNY ESF professor and director of the Thousand Islands Biological Station (TIBS), discussed his work on Muskellunge population revitalization on the St. Lawrence River. He talked about the history of Muskie fishing in the 1000 Islands, and how overfishing was a major factor in the depletion of this apex predator of the River. He informed those in attendance that the introduction of invasive species, including zebra mussels and round goby, through ship ballast water exchange may have contributed to the VHS virus that killed so many mature St. Lawrence River Muskie a few years ago. Dr. Farrell credited Save The River’s Muskie Catch and Release Program with helping his research program gather statistics on the health of the River population of these magnificent fish. His slides and charts of the population catch throughout the past few decades informed the conference attendees about the size limits of the fish, and the catches of juvenile fish in his research nets in the River. He also showed slides about their work at TIBS to hatch and release native Muskie back into the 1000 Islands waters. As part of Dr. Farrell’s presentation, Anna Conklyn, a PH. D, candidate at SUNY ESF studying under Dr. Farrell, gave a brief presentation on her doctoral research on Muskie.

After the featured speakers concluded, Save The River Board President Jeff Garnsey presented the 2019 winner for The Dan Tack Annual Muskie Catch & Release Tournament Award to John Powers, who caught and released a 58” Muskie on Captain Chuck Constantino’s Finlander on November 2, 2019 near 40 Acres Shoal. This new award is part of Save The River’s on-going Muskie Catch & Release Program to highlight and protect the Muskie population on the St. Lawrence River, named in honor of Dan Tack – a longtime supporter of Save The River.

“Preparations for the winter conference begin during the previous February, so for months we have been anticipating bringing these speakers to the River to share their vast knowledge. Throughout the day we heard positive feedback about the quality of the outstanding speakers and their presentations,” said John Peach, Upper St. Lawrence Riverkeeper and Save The River executive director. “We’re proud to put together this important event and showcase an array of River-related topics from creating resilient shorelines, Asian carp, causes of water levels in the Great Lakes, climate change and its effect on loons and the River, and a path to revitalization of muskies. Also, the update on Save The River’s In the Schools and On the Waters education programs funded since their beginnings by the Fresh Sound Foundation, now entering their 12th years, was very interesting to our audience.”

For the second year, Save The River was able to offer a live stream feed of the entire conference. Working with Steve Weed Productions, the speakers were able to reach an even wider audience. The video of the conference will be made available to all in its entirety. Links will be shared on Save The River’s social media pages, website, and through their eblasts. It can still be viewed by going to https://bit.ly/2GSsSWV.

Next year’s Winter Environmental Conference will be held on Saturday, January 30, 2021. 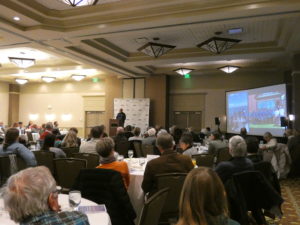