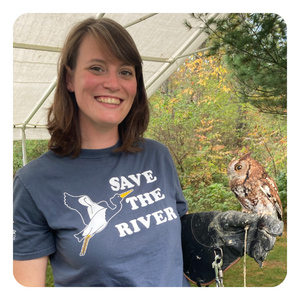 Lauren Eggleston has been promoted from Program Manager to Assistant Director. Lauren has worked at Save The River since the fall of 2020 and has played a crucial role in expanding Save The River’s advocacy and education programs.

Ms. Eggleston has a Master’s of Science degree in Structural Geology and Tectonics from the University of Alberta – Edmonton. During her graduate studies she also worked as the Head Teaching Assistant for the Engineering Earth Science department. She previously worked at the Minna Anthony Common Nature Center where she managed educational programs and a team of interns. She has also created various naturalist programs for grade school children and worked in coordination with Save The River and Thousand Islands Land Trust (TILT).

As Assistant Director, Ms. Eggleston, will continue her duties overseeing Save The River’s In the Schools and On the Water programs and volunteer programs while increasing her role in STR’s advocacy efforts. 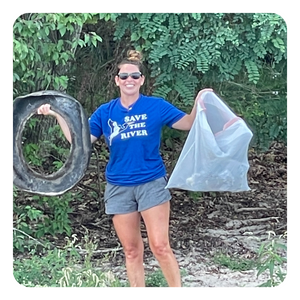 Lindsey Leve has been promoted from Outreach Coordinator to Outreach Manager. Lindsey previously worked as Save The River’s Outreach Coordinator from March 2014 – March 2016 before leaving to start her own marketing business, Wintergreen Digital Media. Lindsey came back as a full-time staff member in March 2021 after filling in for this position part time from January 2020 – March 2021. She has been a key player in bringing Save The River’s Trash Free River program to life. Since September 2020 over 200 volunteers have helped cleanup over 25 sites along the St. Lawrence River.

As the leading grassroots advocacy organization working to protect the St. Lawrence River, Save The River takes an active role in River policy issues, engaging decision makers, community leaders, residents, visitors and volunteers to make positive change. Every year it works with educators in school districts in the watershed to educate 1,000+ students in a place-based curriculum that stresses age appropriate aspects of stewardship.