Styrofoam in our 1000 Island Beaches

You are here: Home / Latest News / Styrofoam in our 1000 Island Beaches

Several years ago, I noticed a blue color appearing on our 1000 Island beaches and rocky shorelines that had not been there in the past. Wading along the beaches, it became obvious to me that the blue and white polystyrene (styrofoam) material used as dock floats was breaking loose and degrading into small granular-size particles to become a pervasive part of our beaches. This environmentally disastrous material, used in docks and swim floats across the River, is an ecological calamity.

The styrofoam is broken apart inside the wooden docks by different factors – muskrat and mink nesting habits, abrasion from ice and waves. Save The River Upper St. Lawrence RiverkeeperⓇ is seeking the help of all River lovers to replace styrofoam with more sustainable materials that will not harm the environment. 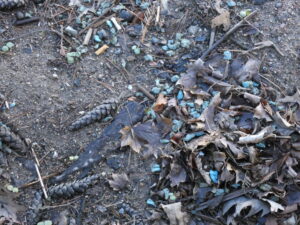 A few winters ago, at Save The River’s Winter Environmental Conference, Dr. Sherri Mason introduced many of us to the perils of microplastics in the Great Lakes and St. Lawrence River. Since then, research has shown that microplastics and nano plastics enter the intestines and bloodstreams of humans, birds, fish, and other creatures. New research shows that toxic chemicals can attach to these microscopic plastic particles, making them even more potent as a source of contamination and pollution.

Dr. Mason recently told Save The River “We’ve all seen the beached whales with stomachs full of bags and sea turtles with straws up their nostrils, and these images are devastating, but my bigger concern are the small pieces of plastic, the microplastics, which carry all sorts of toxic chemicals into living organisms. Little toxic pills that don’t immediately lead to death, but far worse ecological impacts.” She went on to say “Plastic pollution is second only to climate change when it comes to the survival of our species. I know that sounds like I am being melodramatic, but I’m not; I’m being realistic. When you consider the lifetimes of plastic, the small sizes that it can break down to, the ability of those to not only invade our bodies and organs, but to carry endocrine disrupting chemicals, chemicals which have wide-ranging and significant impacts, the reality of this type of pollution is stark.”

During Save The River’s recent Trash Free River cleanups, several volunteers commented that “We are seeing a lot of blue styrofoam in the sand, nestled among the shoreline rocks. There’s also a lot of white styrofoam pellets on the shore, maybe left over from earlier generation dock floats or cheap styrofoam coolers.” They asked, “What can be done about getting rid of this environmentally disastrous material?“ 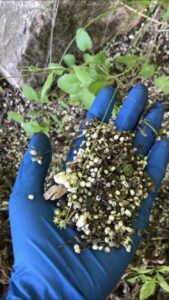 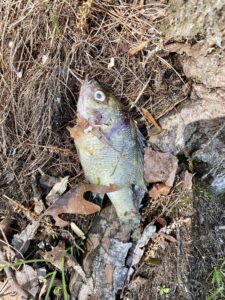 Dead fish with styrofoam in gills – Photo By Isabella Colello

In recent conversations with Mckenzie Garlock of Garlocks Hardware and Lumber Co. and John Durand of Wellesley Island Building Supply, I was informed by these two knowledgeable floating dock builders that there are alternatives to the use of blue styrofoam floats. Most floating dock builders are now building the vast majority of their new floaters using steel or virgin PVC tubes to support the docks. Mckenzie recommends the use of individual encapsulated floats to replace the deteriorated blue styrofoam material. From my own experience, these smaller floats are a good repair option – although they can be a challenge to install. While using plastic encapsulated tubes and floats may seem to be introducing more plastic to the environment, they are guaranteed for 25 plus years and should not degrade into microplastics.

Save The River highly recommends replacing the blue styrofoam in your existing docks to stop the scourge of adding to the microplastics already in The River. There are excellent dock builders and repairers in the area on both sides of the River who will make the repairs for you and help us all in our mission to restore, preserve and protect the Upper St. Lawrence River now and for generations to come.

Thank you for your help on this opportunity to assist Save The River and others in stopping the proliferation of this toxic material into the River. 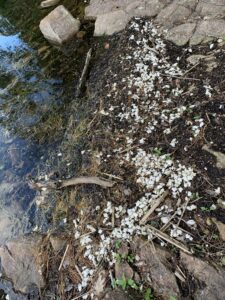 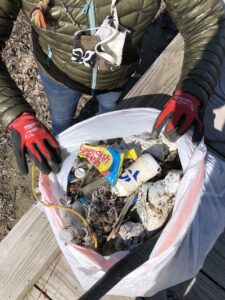 Volunteer Janet Staples demonstrates how much trash she picked up in just 2 hours in Fishers Landing on 4/23/2021. 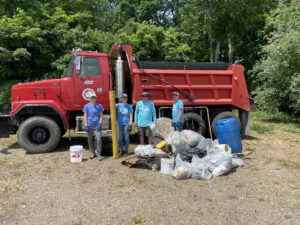 Save The River Staff with the trash collected on Friday, June 11th at the Wellesley Island Trash Free River Cleanup.