Save The River Appoints Executive Director 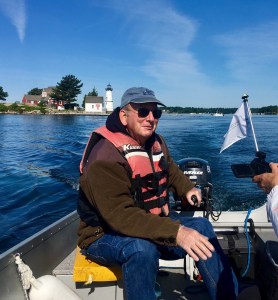 Save The River announced today that John Peach has been appointed to serve as the executive director and Upper St. Lawrence Riverkeeper. Peach had been serving as the interim executive director since mid-June while a search committee received applications from potential candidates. Peach previously served on Save The River’s board of directors for nearly two decades.

“John was the obvious and overwhelming first choice as the new executive director. His years of experience in not-for-profits along with his love of our River made him an easy selection,” said Jeff Garnsey, president of Save The River’s board of directors. “John brings with him the energy to guide our organization as well as hands-on experience to make the tough decisions required by the position.”

“My passion is that Save The River remains strong in our work to protect the Upper St. Lawrence River through advocacy, education, and research,” said Peach. “Now that Plan 2014 has been approved and is in operation, it will allow Save The River to focus on key river issues such as plastics in the River and water column, the very real threat of aquatic invasive species including Asian Carp, pollution from river municipalities, residential sewages, and agriculture run-off, and the threat of diversion of our precious fresh water. Save The River’s In the Schools and On the Water programs placed 950 students and 37 educators out on the River this year for hands-on scientific education. Our Common Tern restoration program in conjunction with Thousand Islands Land Trust (TILT) saw a record-breaking number of Tern chicks banded. Our Beach Watch water quality analysis of six swimming sites is now its twentieth year, and our shoalmarkers continue to guide River boaters safely around many of the area’s most treacherous shoals.”

John joined Save The River’s board in 2000 and has served in several key roles including as president from 2004-2007, on the executive committee, and most recently as treasurer leading the finance committee. He is an active volunteer in Save The River’s Common Tern Monitoring program and shoal marking program and will continue his work in these programs while serving as executive director. Prior to his retirement several years ago, Peach worked as an international business consultant in fields including arts, oceanographic research, environmental, and pharmaceuticals. He and his wife Pat call Huckleberry Island near Ivy Lea home for a significant portion of the year; their children and grandchildren represent the fifth and sixth generations of family living in the Lake Ontario and St. Lawrence River region.

Save The River Remembers Ken Deedy

Save The River remembers Ken Deedy, Board of Directors Emeriti

Ken Deedy served on the Board of Directors from the mid-80s to 90s, a pivotal time in Save The River’s history as the organization developed dynamic programs engaging River residents and established a stable financial foundation with a permanent home in Clayton. Ken was an earnest and enthusiastic member of Save The River, someone who saw the big picture and was full of ideas for synergistic collaboration.

“I was very fortunate to come to know Ken over the last twenty years. He was one of the most intense individuals I’ve ever met when speaking about protecting our beloved Thousand Islands. Always generous with his time and money, he was usually in the lead on any project that benefited The River,” said John Peach, Executive Director of Save The River. “So it was no surprise to us when we learned that one of Ken’s final acts of generosity was to create the ‘Kenneth Deedy Environmental Internship Fund’ to benefit the work of Save The River, Thousand Islands Land Trust, and Minna Anthony Common Nature Center and ensure that these organizations continue to work together for the common good of The River.”

The Board and staff of Save The River are humbled and inspired by the example set by Ken in his work to protect the St. Lawrence River.