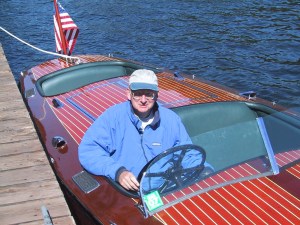 Save The River announced today that John Peach has been appointed to serve as the executive director and Upper St. Lawrence Riverkeeper in an interim capacity until a new director has been hired. John has resigned from his position on the board of directors to serve in this interim role. The search process for the next executive director has already begun, overseen by a search committee chaired by Diane Leonard, secretary of the board.

“We are pleased to have John stepping into this leadership role while we search for our next executive director,” said Jeff Garnsey, president of Save The River’s board of directors. “His experience as a long-time board member and active volunteer ensures that we will continue the progress we’ve made during Lee Willbanks’ time as executive director. John will provide continuity for our projects while we focus on finding the right person to join our organization.”

“My passion is that Save The River remains strong in our work to protect the Upper St. Lawrence River through advocacy, education, and research,” said Peach. “Summer is a busy season for us with many of our programs and events taking place in the next few months, including the celebration of our 40th anniversary. I look forward to representing our organization and will be available to our members and communities both at the office and out on the River.”

John joined Save The River’s board in 2000 and has served in several key roles including as president from 2004-2007, on the executive committee, and most recently as treasurer leading the finance committee. He is an active volunteer in Save The River’s Common Tern Monitoring program and shoal marking program and will continue his work in these programs while serving as executive director. Prior to his retirement several years ago, Peach worked as an international business consultant in fields including arts, oceanographic research, environmental, and pharmaceuticals. He and his wife Pat call Huckleberry Island near Ivy Lea home for a significant portion of the year; their children and grandchildren represent the fifth and sixth generations of family living in the Lake Ontario and St. Lawrence River region.