Did you know: North America has the highest diversity of freshwater mussels in the world!

Freshwater mussels are filter feeders that inadvertently remove particles of pollution from the surrounding water and absorb them into their bodies. Perhaps not the most photogenic of species, these bivalves are powerhouses that filter and clean our waterways. While we humans rarely consume them (NYS Fish & Game Advisories), they are an important link in the food chain as a meal for raccoons, river otters, birds, and more. 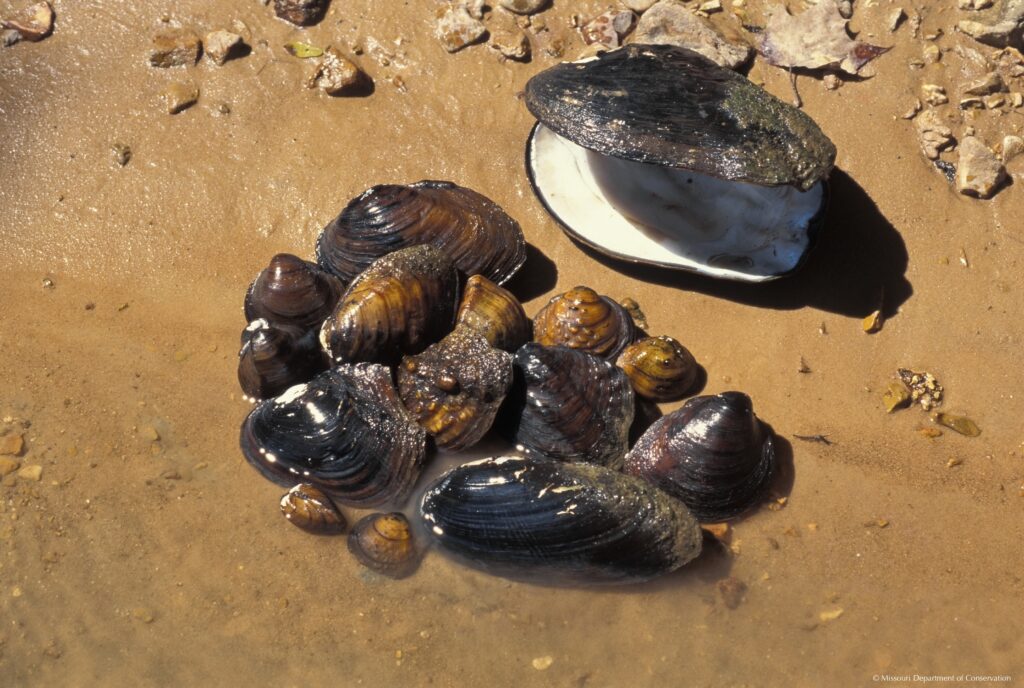 Native freshwater mussels have had a tough go. During the 1800s, the Pearl Button Industry used unsustainable fishing methods and nearly wiped out the mussel population; the prized nacre (mother-of-pearl) found on the inside of the shells was coveted for fashion. In the 1980s, invasive zebra and quagga mussels hitched a ride into the Great Lakes in cargo ships. Since then, zebra and quagga mussels have essentially taken over. These invasives reproduce at an incredible rate: one mature female can release eggs into the water column up to six times a year. In comparison, native freshwater mussels usually release eggs only once a year. The zebra mussel life cycle is much more efficient (when it comes to taking over the river) than the native freshwater mussel, and they outcompete the heelsplitters, floaters, papershells, and lamp mussels.

Native freshwater mussels’ numbers are slowly recovering. Humans have been on the lookout for our filtering friends since the early 1900s, when the button industry realized that they were decimating their supply. Sustainable harvesting methods initially aided the mussel population. More recently, efforts to stop the spread of invasive zebra and quagga mussels have helped struggling native freshwater mussels to survive. But they need our involvement! Help to stop the spread of invasive species. Wash your water sports gear, let it fully dry before you head to a different body of water. Be mindful: don’t dump your bait or forget to drain your boat.

Save The River is developing a booklet for Grade 6 students – packed full of fascinating facts about freshwater mussels! We hope you enjoy this sneak-peek at one of the pages. This booklet is part of the Unionid Refuge Invasive Species Research Project, funded by NYSDEC, created in partnership with the Saint Regis Mohawk Tribe Environmental Division and the New York State Museum. The three-year grant investigates how river-bottom sediments influence invasive zebra and quagga mussel colonization on freshwater mussels in the Lower Grasse River. View a sneak peek at the booklet!