Save The River’s first annual Trash Free River cleanups were resounding successes. Taking place in late September, the two days of cleanups scoured the Clayton waterfront from Bartlett point all the way around to Washington Island. Funded by the Leonard C. & Mildred F. Ferguson Foundation, about 90 volunteers hauled more than three dump truck loads of plastic and trash from the River bottom and shoreline.

Volunteers from many River and North Country communities joined Save The River (STR) staff and Board members for both cleanups. Along with the goal of removing large amounts of trash from the River, the donors wished to provide a fun and meaningful outdoor event to allow River lovers to do something good for the River while enjoying a day outside during this pandemic year. Working with Covid-19 restrictions, such as wearing masks and gloves, all the participants enjoyed a healthy time on the River pulling large and small items out of the muck, water, and off the rocks. 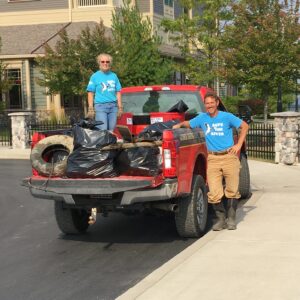 With these two large cleanups under our belt, Save The River is already making plans for more cleanups in 2021. Executive Director John Peach said “We are planning two or three more large cleanups next year in the embayments of the River shoreline. I hope we can also interest a couple of island associations to join us in island shoreline cleanups next spring or summer. We also hope to be able to continue to do some small cleanups later this fall as trash accumulates in areas that can be safely accessed.”

With all the research that is now showing the harmful effects of micro and nanno plastics in humans and wildlife, STR’s Sustainability Committee is actively involved in the Trash Free River cleanups. They are also involved in other initiatives to ban plastics that get into the River and its tributaries. STR’s Board vice-president Lauran Throop and her husband Dan were actively involved in both days of the fall cleanup. Lauran chairs STR’s Sustainability Committee, and has been instrumental in many of our projects to restore, preserve & protect the Upper St. Lawrence River now and for generations to come.

Peach said “ With all of the setbacks and cancellations we went through during this summer of Covid restrictions, the opportunity to move forward with such a positive and important project outside and on the River was greatly appreciated by everyone involved. Working with small teams, including groups from many local businesses such as TILT, ABM, Cerow Agency, St. Lawrence Restoration, Wintergreen Digital Media, Northern Marine, TIAC, and TIPAC, we were able to cover a lot of shoreline. The community and business support was overwhelming. Both the Village and Town of Clayton contributed the use of dump trucks and drivers to make these events successful. The River is cleaner and healthier today due to participation of so many concerned people and the support of the Ferguson Foundation.”