The Common Terns (Sterna hirundo) begin arriving at their colonies along the St Lawrence River around May 1 each year.

It’s Tern time again! The Common Terns (Sterna hirundo) begin arriving at their colonies along the St Lawrence River around May 1 each year. And colony sites will be prepped and waiting for them.

The first efforts to determine the status of St Lawrence River terns started as far back as 1978. The first construction of the gull excluder grid on Eagle Wing Island happened in 1990. That was 32 years ago. 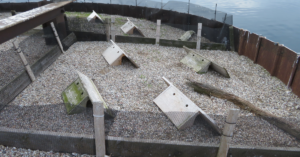 Since then, the program has grown to now include 18-21 colonies between Cape Vincent and Massena. These colony sites, on shoals and channel markers, provide homes for hundreds of nesting pairs that otherwise might have no homes at all. And, over the years, the program has grown to include TILT, STR, NYSDEC, the Seaway Authority, Riveredge Associates, and numerous volunteers.

Each year we band hundreds more young terns just before they are able to fly. And fly they must. By late August they leave on their migration southward to spend the winter in places from Puerto Rico to Argentina.

As it happens, these bands are quite important. Any band found on a dead tern can give us several data points such as: the location of the birth colony, cause of death, age at death, and location/date along a migratory pathway. Bands from St Lawrence River born terns have been recovered in winter from all over Central and South America. 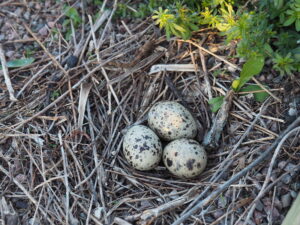 We have also developed a shelter design that affords shade and safety to young tern chicks. Young terns cannot thermo-regulate, and ceaseless exposure to a hot sun can kill them. So the STR tern shelters have become quite popular not only with our terns, but also with other bird lovers and wildlife managers. The STR Tern Shelter design has been published at the Cornell Laboratory of Ornithology website and it has been adopted by the Buffalo Audubon Society for use in their large tern colony on the Niagara River.

Due, in part, to these program efforts, you will see these graceful birds (white with a black cap) in June and July flying along your waterfront looking for a fish to catch. Their kids are hungry.