You are here: Home / What We Do / On-The-Water Programs / Muskellunge Catch-and-Release

Muskellunge, commonly called muskies, are one of the most sought after trophy game fish in the St. Lawrence River. Anglers come from all over the world in search of these amazing fish, which can grow to be several feet long.

However in the 1980s, muskie populations were on the decline because of over-fishing and habitat loss, putting the future of these fish at risk. And, recently, muskie populations have been severely impacted by a new virus, viral hemorrhagic septicemia or VHS.

In the late 1980s, anglers, researchers and Save The River teamed up to encourage the catch-and-release of muskies, in turn, helping the population grow. Since 1987, fishing guides and anglers have caught and released over 1,000 muskies!

This program has helped to rebound muskellunge populations that have been declining since the 1980s. The effect of the VHS virus has made the Muskie Release Program more important now than ever. Replacing large adults back into the River will help to strengthen the remaining muskie population.

To limit stress on the muskie, anglers should:

Save The River and the SUNY ESF Thousand Islands Biological Station, and local fishing guides have teamed up to offer anglers a limited edition signed Michael Ringer print to anglers who have caught-and-released a legal sized muskie. 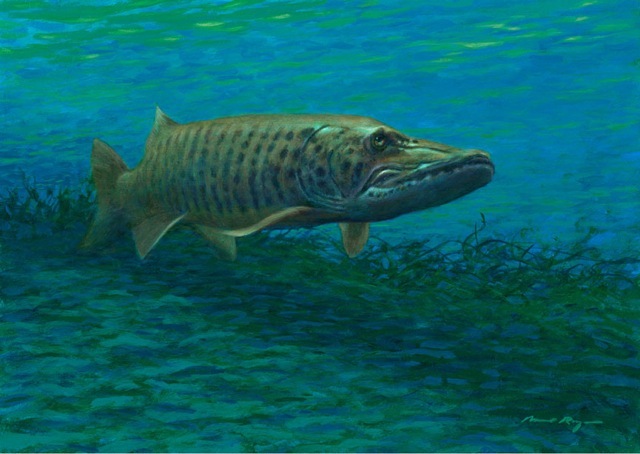 The only way to get your hands on one of these prints is to certify that you have caught and released a legal sized muskie. To claim your print:

As soon as we receive your form, we’ll send you the limited edition Michael Ringer print Sovereign to commemorate your fish. This print is only available to anglers who have participated in the Muskie Catch-and-Release program. All participants are also automatically entered in to our Dan Tack Annual Muskie Catch and Release Tournament with the winner being announced at our annual Winter Environmental Conference.

Thank you to our program partners!

The Muskie Catch-and-Release program would not be possible without the support of our partners. Many thanks to: